San Francisco Chronicle’s Amanda Gold wrote a fabulous piece on cupcakes that you can read in full here. I, however, found the best part of the article to be the revealing of a recipe from my favorite little cupcake joint, Kara’s Cupcakes here in San Francisco.

Oh and we can’t fail to mention that the sweet treat below is under 300 calories!!! As we’ve said before, cupcakes are the perfect WIT treat. 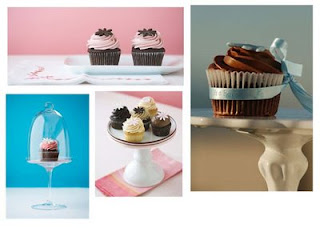 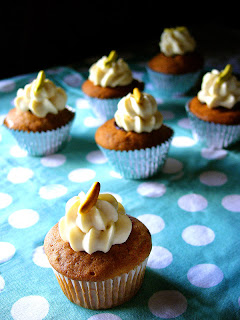 Preheat the oven to 350°. Position a rack in the middle of the oven. Line a 12-cup muffin pan with paper cupcake liners.

Sift together the cake flour, baking powder, baking soda and salt in a bowl; set aside. Add the vanilla to the buttermilk; set aside.

Add the sugar in a slow steady stream and beat for 3-4 minutes, until the mixture appears light and fluffy. Stop the mixer and scrape down the sides of the bowl.

Add the egg and beat well, scraping down the sides of the bowl to ensure that everything is combined.

Add the flour mixture, alternating with the buttermilk, in 3 additions, beginning and ending with the flour. Scrape down the sides of the bowl between each addition, and mix until well combined. Fold in the banana. Using an ice cream scoop or spoon, fill each cupcake liner 3/4 full.

Bake for 20-25 minutes, or until a toothpick inserted into the center of a cupcake comes out free of uncooked batter. Let the cakes cool in the pan for 5 minutes, then remove from pan and place on a rack to cool completely.

For the ganache: Put the chocolate in a heat-proof bowl. Pour the cream and corn syrup into a small saucepan and bring to a low boil over medium heat. Remove from heat and pour over the chocolate. Let stand for 1 minute, then slowly stir the mixture to blend well. Let cool to about 70° on a thermometer or until firm enough to pipe or spread.

For the cream cheese frosting: Combine the cream cheese, butter and vanilla in the bowl of a mixer fitted with the paddle attachment. Beat on high speed for about 3 minutes, until the mixture is light and fluffy.

Scrape down the sides of the bowl and gradually add the powdered sugar, beating well until incorporated.

To fill & frost the cupcakes: Fill a pastry bag with a 1/4-inch metal tip with the chocolate ganache and insert tip into the top of each cupcake. Squeeze the bag until you feel a slight pressure, which should put approximately 1 to 1 1/2 teaspoons of chocolate in each cupcake. You should only squeeze for a couple of seconds. Alternatively, cut off the top of each cupcake, scoop out a bit from the center and replace with 1 to 1 1/2 teaspoons of ganache, or place a dollop on top of the cupcake and frost around it. (You should have about 1/3 cup of the ganache left, which can be stored in the refrigerator for future use or used for garnish.) When all the cupcakes are filled, frost them with the cream cheese frosting.