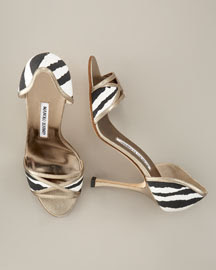 If you read WIT & Whimsy regularly, you’ve probably already noticed that I’m somewhat of a shoe fiend. I LOVE shoes. My closet is full of them. Some find the collection a tad ridiculous, but in my mind, one can never have too many shoes as long as you’re wearing them! Boots, flats, sandals, wedges, pumps, stilettos…all favorites of mine. Honestly, I’d rather walk in heels than flats. What’s better than a stride in heels, really?
Considered somewhat of a shoe god, Manolo Blahnik epitomizes all that women want in shoes. When given the chance, many women run right to his shoes to get in on the phenomenon. Handmade, Manolos are seen much more as works of art by shoe lovers.

Blahnik keeps his lines rather linear in that the style of shoe does not vary often. He lives and breaths heels and it can be argued that he donned sex appeal upon stilettos.

Manolo Blahnik inspires huge loyalty and devotion- and to me, there is no question as to why. Remember those blue satin heels adorned with a large buckle featured in the “Sex & the City” movie? Well, their sticker price is $945. Goodness! And, according to a NY Times article a few months ago, Bergdorf Goodmans (where the shoe would be on sale exclusively), was besieged with order requests after the movie made its debut. That’s absolutely devotion.

More so, in the same article, you get a good idea of Mr. Blahnik himself.

“…Mr. Blahnik said he thought it was wonderful that customers, especially Americans, get so excited about his shoes and whenever he makes a store appearance.

But even he is a little disturbed by the prices of designer shoes these days, when a classic design — albeit one that had a little screen time — could approach four figures.

“Things are just like that now,” he said. “To make shoes is not a profitable business any longer. A piece of crocodile costs a fortune. The whole thing is becoming ridiculously expensive.”

Now that’s refreshing. (Albeit, refreshingly expensive). I’ll know I’ve made it when I don my first pair of Manolos…I can’t wait!