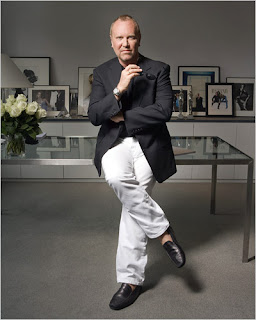 He’s a designer that needs no introduction. His fashions have been talked about for nearly three decades and he’s continuing to define iconic styles. It’s Mr. Michael Kors.

Made a household name in the mouths of those on 5th Avenue and the Champs Elysee, Kors‘ judging role on Project Runway made himself not just a name, but a personality. Recently profiled in the New York Times, Kors discusses how his fashions display an infatuation with the traditionalism of the Eastern Seaboard haute bourgeoisie.

What I personally think is best about Kors‘ designs are his eye for sophistication and ability to tailor clothes so his clients look polished and prosperous but hip at the very same time. (I’m a huge fan of his handbags, sunglasses, and shoes. Someday I hope I can be a huge fan of the more pricey pieces including sleek skirts and sweet, but sexy dresses!)

The full profile can be found here, but here’s a sneak peek at only a small part of Kors‘ fabulousness revealed in the article:

“His knack for catering to clients’ fantasies — and his mounting visibility — have combined to transform his once modest business into a fashion brand with more than $600 million in wholesale revenues and 60 stores.

As fall approaches, his image and imprint seem to be everywhere. The models in his new advertising campaign look icily confident wearing Mr. Kors’s cat spots and mink. His spring 2009 collection, inspired by ’50s Portofino and ’60s Malibu, will be unveiled in its usual Wednesday morning slot during New York Fashion Week next month, on Sept. 10. Later in the month, he will make a cameo appearance as himself in “Gossip Girl,” playing to the children and grandchildren of the women who discovered his sporty brand of glamour in the early 1980s.

A source close to the Kors company said that the designer’s “Project Runway” fame has translated into 5 percent of the company’s gross. “No question it helps that Michael is a media star,” said John Idol, the chief executive of the Kors company, declining to confirm an exact figure attributable to the show. “Project Runway has had a major positive effect on our business.”

Once chiefly a clothing brand, the line now includes handbags, shoes and other accessories (accounting for 85 percent of sales). In addition to the top-tier designer collection, priced from about $700 for a sweater to around $3,000 for a cocktail dress, there are two lower-priced women’s lines, Michael Michael Kors and Kors Michael Kors (shoes and coats), and a men’s wear label.

The lines, sold in department stores including Nordstrom, Lord & Taylor and Neiman Marcus, are also found at 31 free-standing Michael Kors “lifestyle” shops. An additional 70 of those stores, which sell both his high-end and secondary lines, are planned over the next three years.. Next year the company plans to increase its advertising budget by 15 to 20 percent.”

excerpt and photo courtesy of The New York Times