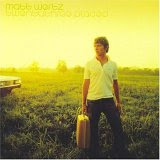 Last night I saw one of my very favorite people, Matt Wertz, in concert here in San Francisco. I’ve known Matt since back in 2001 and have followed his musical career ever since. Extremely talented, witty and laid back, Matt’s music embodies exactly what I love about listening to tunes: that feeling when you’re in such a great mood, everything seems right in the world and all you want to do is drive with the windows down, singing along to the melodies. Pure WIT joie de vivre!

Having helped Matt put on a couple shows in the past, I’m clearly an avid fan of his, but I can’t promote him enough. He is so darling and his music is personal, sweet, sincere and meaningful. Listen to his lyrics and I promise you that you’ll actually find enlightenment or commonalities and recognize that you’re not alone in what you’re going through- whether it be a breakup, a death in the family or a struggle to find what you’re meant to do in life.

His newest album, with Universal Republic, drops August 19th. Until then, check him out on iTunes and for your listening pleasure, I’ve put some of my favs below.