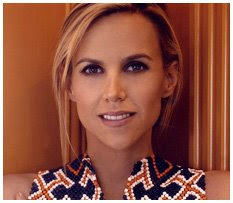 With the overwhelming success of her Reva ballerina flats (over 300,000 had sold by June of ’08), it’s no surprise that those ballet beauties catapulted designer Tory Burch onto the fashion scene, even getting her named as “the most copied designer in America,” according to The Los Angeles Times.

As you learned, Tory is a WIT in her own right. Her designs embody effortless sophistication and casual chic. My roommate, Andrea, adores her Revas (both pair) because, without any thought, she can slip on the comfy leather flats and feel more, as she likes to say, “fancy.” But it’s pretty much true. My Revas have accompanied me on endless adventures since I’ve had them (they are totally worth their $195 price tag).

Tory burst onto the New York socialite scene and received a pass into fashion’s fast lane when Oprah tapped her for the Couch of Destiny and raved about her love of Tory Burch’s signature tunic. (We all know how Oprah’s praise works like that of Midas’ hand).

I’m personally not the biggest fan of her clothing- only because it reminds me a bit too much of the 70s resort wear that just doesn’t fit my style, but I’m also not who Tory primarily designs for so it’s ok. Tory is designing clothes for women who can relate to her. Her shoes though? I adore them. Someday in the future I will spring for a pair of pumps. Like these Meghan ones that are so perfectly named if only I could get them free of charge! (sigh…wishful thinking).

Tory Burch in a nutshell (according to the Times):

The clientele tends toward girls who never rebelled — and the moms who shop with them. All the matching terrycloth drawstring pants they’ll need to equip themselves for life in the eternal resort.

If you can overlook the entitled persona of the brand herself, it is undeniable that Tory Burch fills a fashion gap large enough to push most socialites into; millions of lemmings will jump in after them.