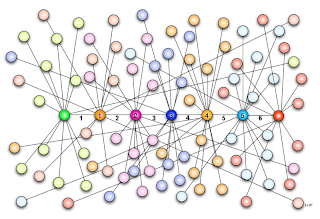 Microsoft has just announced the results to what I think is a completely cool study. MSNBC’s article here describes all the detail that went into the research, but it truly is a small world after all. Check it out:

“With records of 30 billion electronic conversations among 180 million people from around the world, researchers have concluded that any two people on average are distanced by just 6.6 degrees of separation, meaning that they could be linked by a string of seven or fewer acquaintances.”

So I guess it’s not just living in San Francisco that makes it feel like you have an insane amount of connections when you meet friends of friends and strangers. It’s kind of nice to know that despite the size of the earth- we’re all a lot closer than we think.

In light of all this, if you don’t already use it- check out Google Talk or ‘gchat’ as the we like to refer to it. Much more popular than AIM today, it automatically loads those you e-mail with Gmail accounts and makes it easy for you to chat right within your inbox. Now keeping in touch with other gals is all the more easy. Got 2 Luv That. 🙂

photos courtesy of wikimedia.org and google